I wish I could be in the States right now! 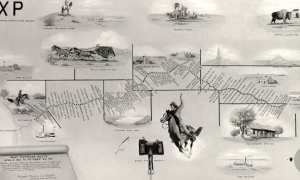 Patrick Hearty is my Utah contact for my  NEARLY- completed novel Express Desire. 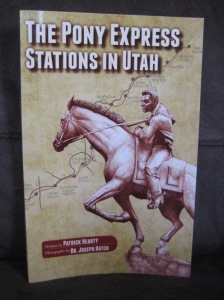 Photo above: Patrick and Joseph’s book. Photo to right: Joseph L. Hatch, left, and Patrick Hearty talk about the history of the Pony Express. (Thanks to Scott G. Winterton, Deseret News)

Patrick will be riding the trail next week from Traveler’s Rest (just south of Salt Lake City)….. 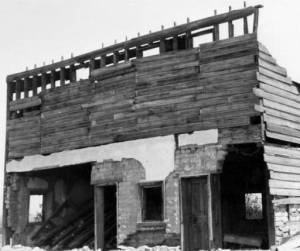 Here is the Traveler’s Rest (or Absalom Smith) Station, with the front torn down, but the pic shows the first part built.  Thanks to the University of Utah for the photo, (http://content.lib.utah.edu/cdm/ref/collection/USHS_Class/id/13504)

to Simpson’s Springs (somewhere out in the Utah Salt Desert!).

A painting of Simpson’s Springs Station

He will  ride on horseback from approximately 5 am on the 23rd till 2 pm on the 24th! That’s about 74 miles, all up, through what was one of the most dangerous portions of the trail ‘back in the day.’

(Speed? Right around 8 mph, a little slower than they used to average.)

Lookout Pass, just perfect for ambush with its narrow canyons, is in Patrick’s stage of the trail.

It is in Lookout Pass that Aleksandra, my heroine, is ambushed by Paiute Indians and… (but that would be telling!)…. you’ll just have to read the book!

“Mose Wright described the Indian arrow-poison. The rattlesnake – the copperhead and the moccasin he ignored – is caught with a forked stick planted over its neck, and is allowed to fix its fangs in an antelope’s liver. The meat, which turns green, is carried upon a skewer when wanted for use: the flint head of an arrow, made purposely to break in the wound, is thrust into the poison, and when withdrawn is covered with a thin coat of glue. Ammonia is considered a cure for it and the Indians treat snake bites with the actual cautery. . .”

Yep, it gets messy, but then, it often did.

The “Pony”, as the Pony Express was called, only actually ran for 18 months or so, a bit less because Indian attacks caused it to shut down for about a month and a half…  (Why, you say? Well, when all the stations for over 50 miles are burned down, stock stolen and station tenders killed, it’s pretty hard to maintain a route!)

then the new trans-continental telegraph line took over its major communication function, and it ended basically the same day.  But it did serve an important function in keeping California in the Union and preventing its secession to the South! More details in the story!

My son and I will just have to see the trail next month without the galloping ponies and small great men (and women, these days, no doubt!) flying down the trail!

Somehow, I don’t think we’ll be going at quite that pace on Patrick’s horses!

For more details on the Re-Ride itself, please visit the XPhome site, (XP is for Express!). Tom is staying busy keeping the site updated from the reride as I write!

Hope all of you out there riding the trail are having the time of your lives!

One comment on “20th Anniversary of the Pony Express Re-Ride is ON!”